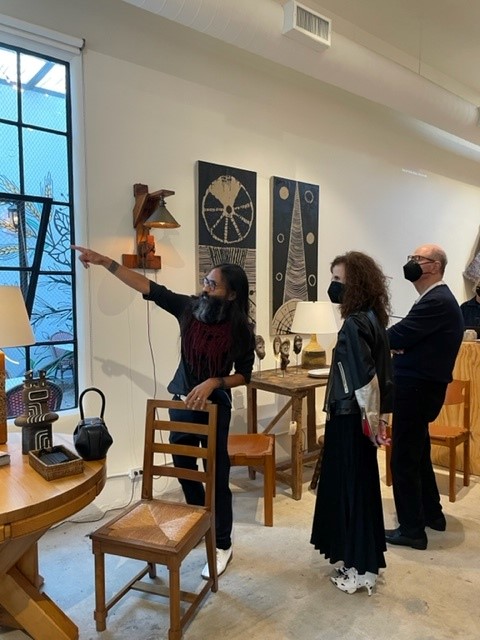 As SJ Shop goes into its third year, we are finally coming out of our pandemic shell and wanting to engage more with the public. We are planning an ongoing series of exhibits by featured artists as part of this initiative. Having recently been appointed to the Board of Governors of Otis College of Art and Design, I have had the fortune of meeting some of the talented faculty as well as the graduates who live in L.A. So it naturally followed that I would feature some of them in the Shop’s exhibits and collections.

who is on faculty at Otis College of Art and Design. Lorenzo’s work integrates materials from around the world, including beads, paper, and embroidery, using universal techniques such as weaving, painting, and carpentry.

The Journey of an Artist

Born in the border town of Ciudad Juarez, Chihuahua, Mexico, in 1979, Lorenzo grew up in a culture of craftsmanship. With modest incomes, many of the people in his community learned how to make things to survive, from the garments they wore to the houses they lived in. His mother was a knitter who made all the family’s clothes. As a child, Lorenzo started creating decorative objects, eventually joining his grandmother’s crafting group as the only male member, and began selling his work at local markets as a teenager.

Lorenzo received a scholarship to study engineering but declined instead to pursue an education in art at UCLA, from which he earned his BA in 2003 with a focus on print-making. He received his MFA from Otis in 2007 and has been a professor of Illustration in the Department of Communication Art at the college for 14 years. 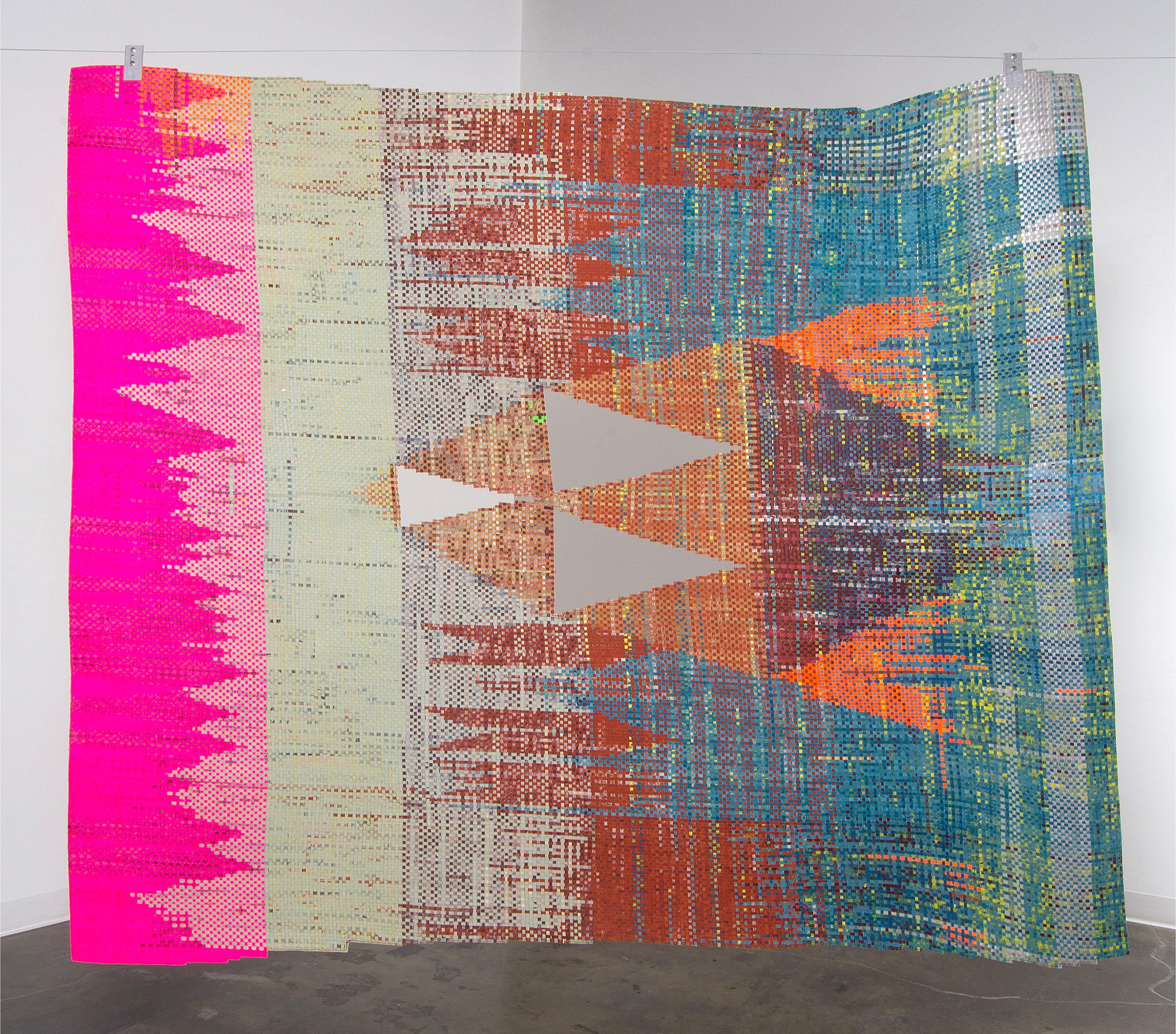 Lorenzo uses craft as an entry point for his audience. “Most of us have some reference in our lives to woven and beaded handcrafted items,” he told me. “I use these techniques to invite viewers into my work.” I am awed by the number of techniques he has mastered, from painting and sculpture to paper weaving and print-making. We selected examples from three of these disciplines for the exhibition in our Shop. 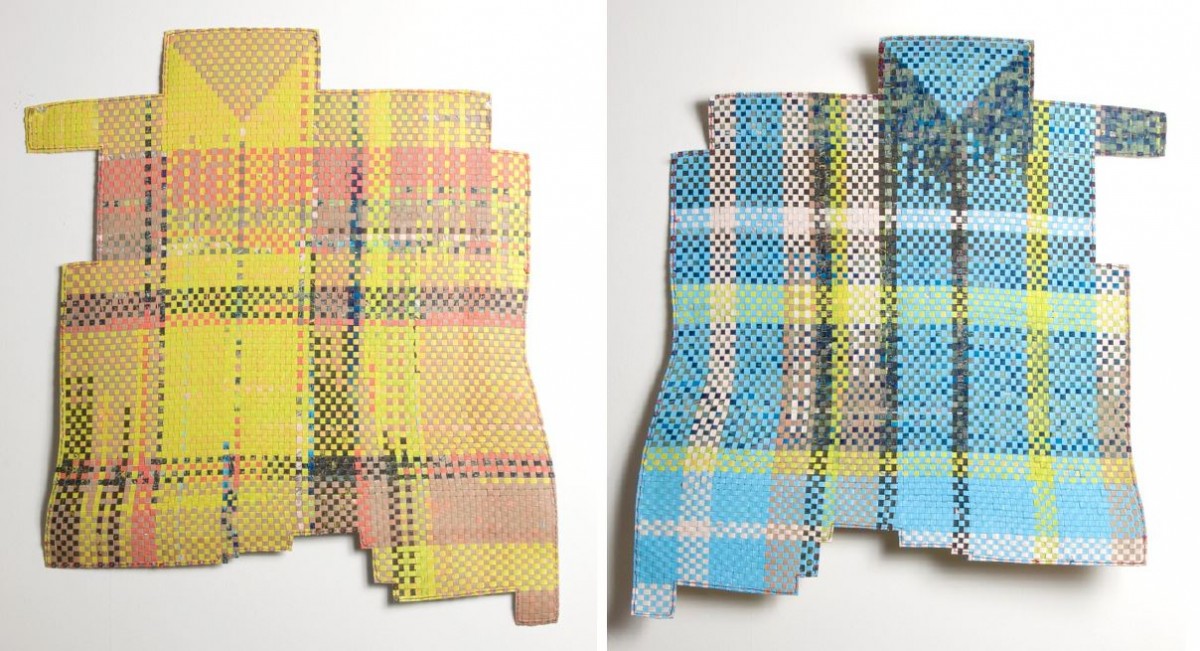 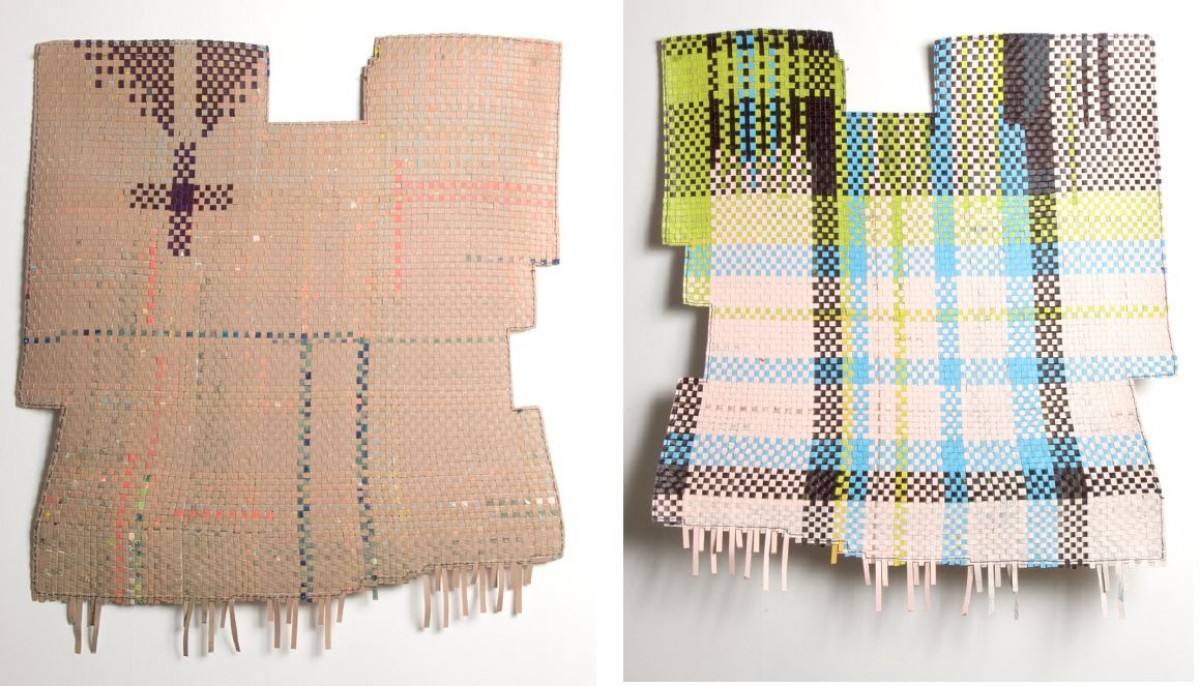 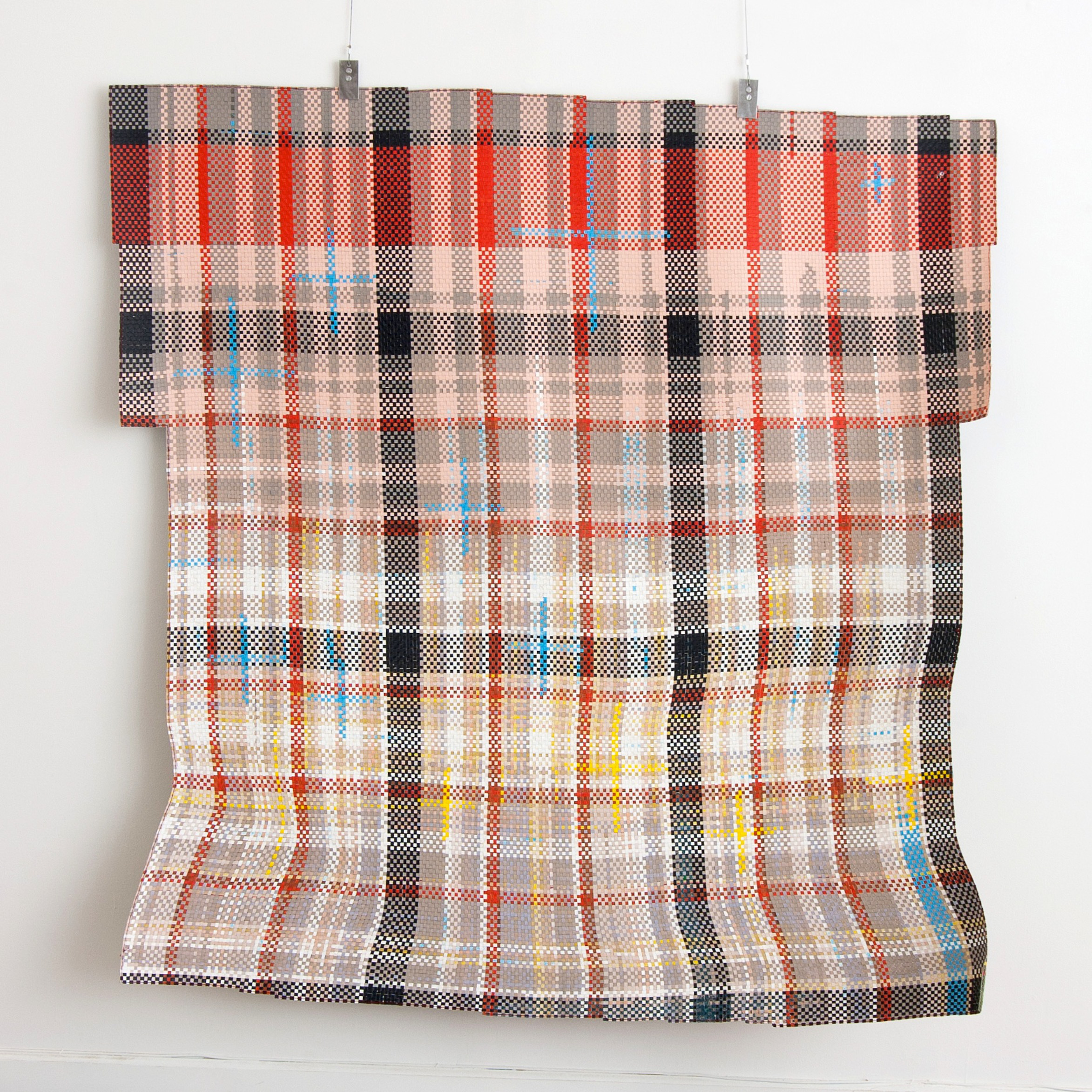 This body of work consists of woven paper constructions based on the grid motif, taking their visual cues from such pancultural sources as basket weaving, Scottish tartan design, and abstract painting. Lorenzo uses the most elemental form of weaving, recognizing its presence in different communities worldwide as an expression of universality.

Lorenzo developed his weaving technique while attending graduate school. “Weaving is an ancient art in Mexico,” Lorenzo explained. “It can be used for strictly functional purposes, such as for sleeping mats or to make crafts. It’s a universal shape that can be found all over the world.” I am drawn to these pieces because they seem so simple, like something anyone can make, yet they are so intricately complex. They are woven to be two-sided, with imagery and context appearing on both sides. 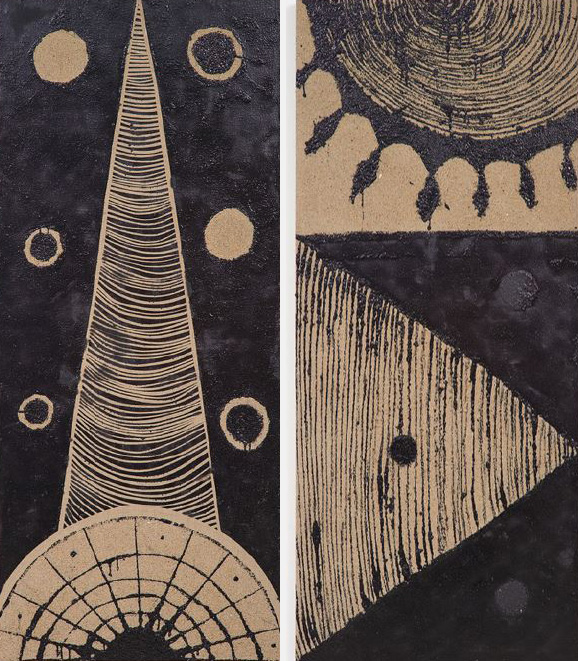 Tar and Sand Paintings on Linen

When I asked Lorenzo about the origins of his tar and sand pieces - richly textured sand and tar works on linen - he replied, “Any one way of working cannot capture the totality of what I am trying to get at.”

So he started out trying to create something geographically linked to L.A., choosing tar as a reference to the La Brea Tar Pits and sand from the beach. “The imagery is a syncretism of Indigenous and European iconography as a way to acknowledge the cultural mix of the communities in the area,” he continued. I love these works because they seem to merge Aztec images with modern art. 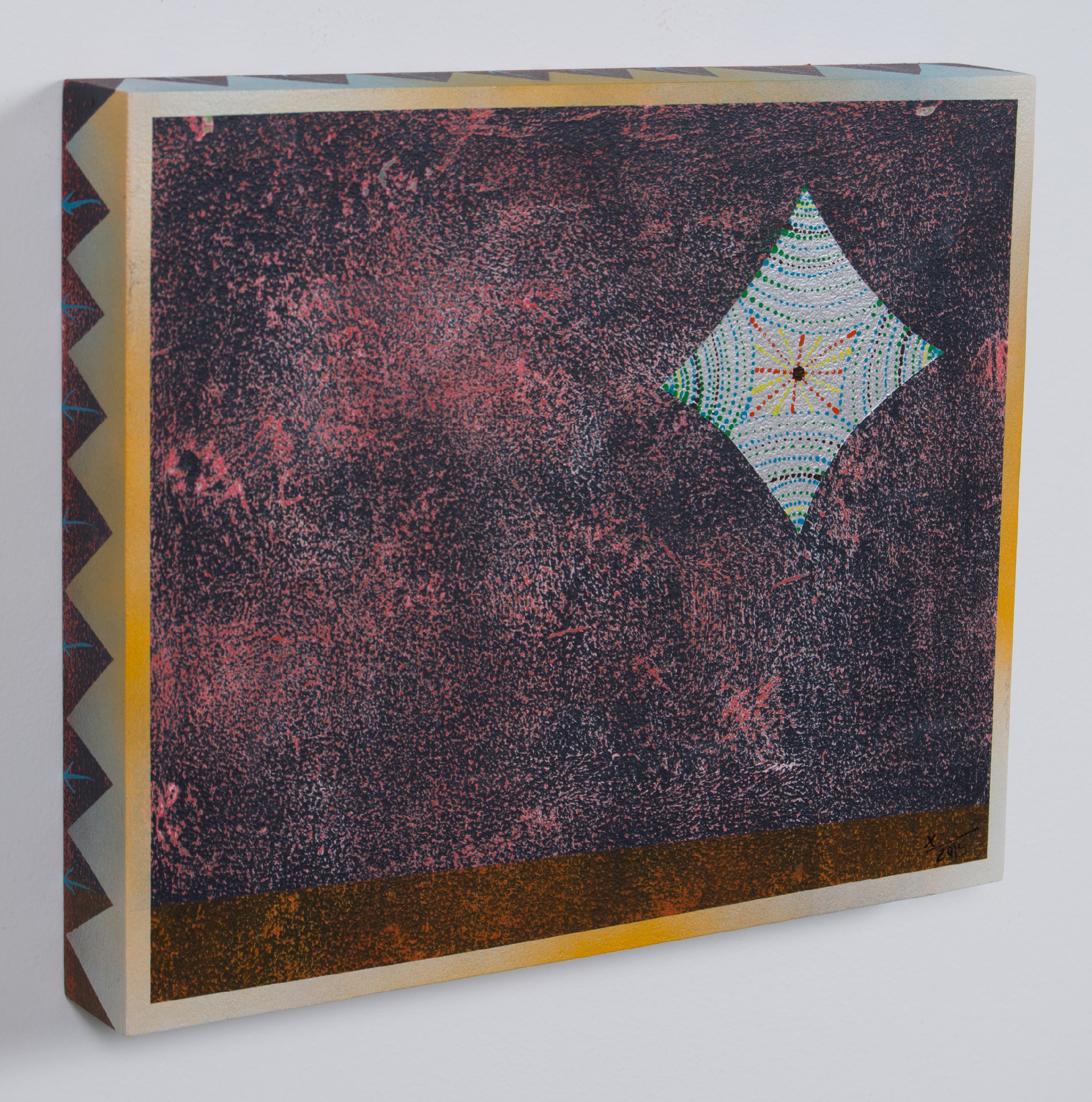 We have two of Lorenzo’s small paintings as well. These pieces really move me, particularly because of the artist’s unusual technique of painting onto the edges, which makes each one more than a painting, elevating it to an object. Lorenzo explained that his process is more organic than premeditated, qualifying it by pointing out the outcome is predetermined to a degree. But the structure allows him to improvise.

Lorenzo Hurtado Sergovia’s work has become a catchall of ethnic heritage, a critical mixture, through a diversity of processes, materials, ideas, and references. I am honored to feature some of these imaginative pieces in the Shop.